Which biking accessories to buy before your first bike trip? (Part 2) 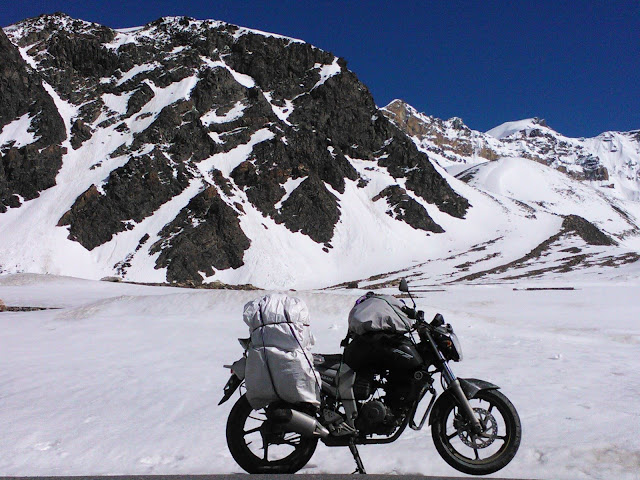 In this second of two-part article, about the type of bag you'll need, why you should have more than one pair of gloves and why balaclava is the best biking accessory you never knew you needed.


Previously, we told you about what to keep in mind while buying helmets, jacket and boots. Today, we'll take you through some of the other essentials. Read on to find out.

So let's look at some of major types of bike-specific bags available in the market so that you can make an informed decision:

- Regular Saddlebag: This one is similar to the traditional horseback saddlebag; you can put your stuff on either side and two bags are connected by a bridge which rests on the rear seat so that you can either place more stuff on top of it or the pillion rider can sit on it provided they can still reach the footrest (often, the saddlebags cover the rear footrest). Some latest models come with provisions where you can detach the bridge and can carry only one of the two if you have limited stuff to carry; and some have straps that convert saddlebag into backpack making it even more versatile.

There are two main types of saddlebags as far as shapes are concerned: straight and angular. Straight ones are for bikes which have straight(er) exhaust pipes like Royal Enfield, Pulsar 180, Yamaha FZ, etc. An angular saddlebag is designed to keep room for the upswept exhaust of sportier bikes like in case of KTM Duke and others.

- Tank bag: Tank bags are used to keep important stuff like bike’s papers, route maps, mobile phone, camera, etc. If you have a metallic tank, say, a Royal Enfield, safely go ahead with a magnetic tank bag which’ll hug your tank without the need for any messy harnesses. Else use a bag with harness. If you don't want to spend money on tank bank, tie your regular backpack using bungee cords. More on that in section 6.

- Tail bag: Some people use this in addition to OR in place of a saddlebag. The tail bag rests where your pillion rider would otherwise sit. It’s only recommended if you’re certain that you’re not going to have a pillion along the way. 😉

- Metal carrier: More commonly known as the Ladakh carrier, this metal cage is almost always seen on Enfields plying the Ladakh/Spiti/Himachal/J&K routes. The carrier has space for all your luggage and also have special sections to carry the fuel cans. The carrier is not just for rental bikes, you too can get one installed on your Enfield but do it only if you’re a seasoned rider and plan to do long distance trips regularly. Do not install this on city commuter and sports bikes like Yamahas, Apaches, Pulsars and Dukes. The carrier will ruin the bike’s body panels.


Tip: Try to buy a bag with a rain cover. If it doesn't have one, buy yourself rain covers made out of cement bags. An adventure shop in Manali specializes in them and you can get these for less than 100 bucks. I've used these bags on a number of rides and they're still in impeccable condition even after being lashed with rain and muck for thousands of miles over the years.

Which type of gloves you should buy depends on where you’re travelling. Similar to the jacket, a pair of gloves with ventilation holes will definitely keep your hand sweat free on a hot day but your fingers will freeze in cold climate; at the same time, sealed gloves are great for winters and rain but in summers, your hand will be in a puddle of sweat.

It’s absolutely okay to buy more than one pair of gloves and keep changing as per the altitude and weather conditions through the route. They don’t take up a lot of space and you can easily carry 1-2 extra pairs with you in your tank bag.

RELATED: PART 1 OF WHICH BIKING ACCESSORIES TO BUY BEFORE YOUR BIKE TRIP

Just remember two things:
- Buy gloves that extend a couple of inches beyond your wrist. Ideally, no skin should be visible between the gloves and jacket, the two of them should overlap and give you a 100% protection from the external elements.

- Make sure the gloves have knuckles. Carbon fibre or titanium knuckle gloves will cost you more than a 150cc bike but even in low-range, say, ₹1000-3000; you can get gloves with plastic/rubber knuckles to protect the skin from getting ripped off in case of a crash. Having said that, you may or may not get knuckle protection in rain or winter gloves; but make sure that the padding provides sufficient protection.

If you have a BMW R1200 or a Honda Goldwing where everything will fit perfect without moving or sliding even an inch inside the metal containers, then skip this section. Else read on.

You can buy yourself either branded bungees (300 bucks for a 3 ft one) or unbranded ones from your local hardware store (50-70 bucks for an 7-8 ft one). Three-way and spider bungees are other options, but they cost anything north of 500 bucks. Personally, I prefer using multiple unbranded bungees - cheap, versatile and durable; and doesn't hurt if you lose or break one. I always keep couple of extra ones with me and have often given to other riders who're struggling to tie their luggage using ropes.

Balaclava is to guys what tank top is for girls. Super versatile! There are so many uses for it, you will never want to part with it. Balaclava is the most bang for your bucks out of all your biking accessories. For just 200-300 bucks you’ll get a balaclava that’ll cover your face and neck during winters, soak the sweat during summer, cover your skin from pollution and dust in city traffic, double up as an ear band during cold/noisy nights and act as an eye mask in bright light. It is so versatile, you’ll be surprised how you lived your life without it so far; in fact, you may even want to use it during your daily peak hour ride to work.

If you look closely, you'll realize that the point of all the protective gear is that not a single part of your skin is exposed to the elements.

Though it may look a bit expensive, remember, they’re investments and will last you years. You’ll be reusing your equipment again and again and hence, they’re an investment in your biker lifestyle and not an expense towards a single trip.

P.S. I haven’t included knee pads because I find them restrictive and not useful enough; thick denim does the work for me. However, if you really feel the need, and if it makes you feel secure and protected, go for it.