Day 14: Slowing things down in Leh

Time to slow down the things a bit. Time to take a breather.

With no fixed itinerary and no annoying travelling companions to look out for, solo travel gives you an opportunity to travel the way you want. That's exactly the reason why my #BombayToLeh trip lasted for 43 days. I traveled at my own pace, and a number of times I changed my plans during this trip. It happened once again on day 14. My earlier plan was to head to the Nubra Valley but since I had slept the night before, thanks in part to no electricity and partying with Israeli friends, I decided to skip Nubra Valley and stay back in Leh.

I woke up late at around 9 am and decided to do some more local sightseeeing after a nice leisurely breakfast. I bumped into an Israeli couple whom I had met the night before at the Zen Garden restaurant. We had breakfast together and I shared tips with them about travelling to Manali, Pangong, etc.

What is this life if, full of care,
We have no time to stand and stare.


No time to stand beneath the boughs


And stare as long as sheep or cows.


No time to see, when woods we pass,
Where squirrels hide their nuts in grass.

The above excerpt is from a William Henry Davies' poem titled 'Leisure'; I had learnt it in school and these lines have stuck with me forever. What's mentioned in the above lins is the exact thing that I'd set out to do on the 14th day of my #BombayToLeh trip, more so than on any other day. To stand and stare. To notice squirrels and see the woods I pass.

After a nice breakfast I spent time taking a fool around the market. A while later, I headed to the Pumpernickel German Bakery for lunch. This one's a highly recommended place and I was looking forward to my meal. As it turns out, the food was fairly average. I'd give them a benefit of doubt and return back to give them another chance.

Something interesting happened while I was waiting for my meal at Pumpernickel. The morning peace was broken by annoyingly loud sounds of after-market air filters stuck to a single cylinder engine. A bunch of so-called 'bikers' stopped their bikes next to the tiny bakery, repeatedly opening-closing their throttle with the 'N' gear being engaged only to attract the attention of the crowd and to proclaim to the world, who doesn't give a shit about their existence, that 'they've arrived'.

This particular breed of living creature wants to be called a biker. This species tries its best to copy the big burly American cross-country bikers in every sense of the way. From donning leather jackets in a country as hot as India to drinking beer during rides just to prove their machoism. The group, named after one of the biggest cafe chains in India, that arrived in front of me were no different. They were loud. They were obnoxious. And they wanted to be noticed. They had donned biker-esque giant moustaches, side burns and hair-dos just for the trip. To look like they're a product of Sturgis. Just because they had a bike and they rode to Ladakh, they thought it was mandatory put on an articifical tattoo sleeves which shouted 'Hey look, I'm a biker. Please look at me. Please?'

I decided to finish my meal and leave the imposters to their shenanigans while I check out the Shey Monastery.

The village of Shey is situated 15 km from Leh. And it's biggest attraction is the Shey Monastery. The Shey Palace was once the royal residence of the King of Ladakh and subsequently it got moved to the village of Stok where it remains till date. 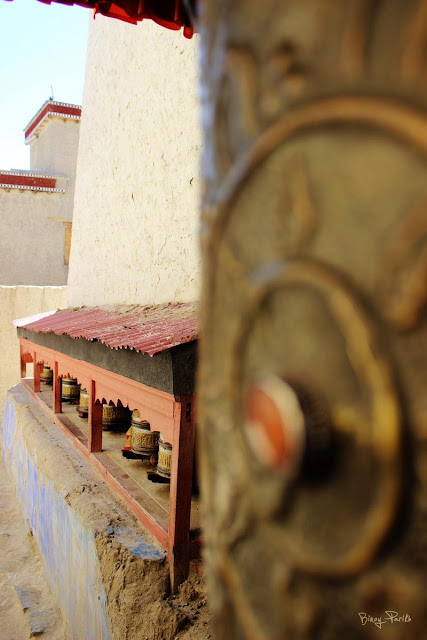 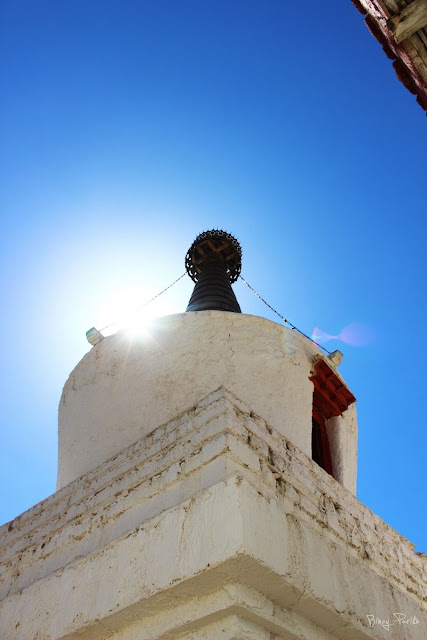 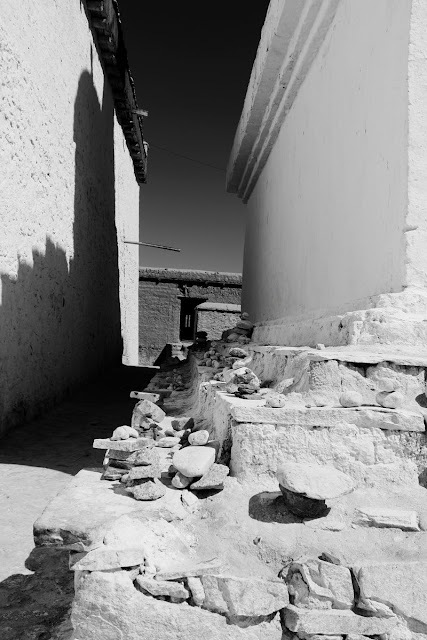 The monastery steps are some of the steppest steps you're ever likely to encounter. And even the fittest of us would run out of breath by the time we complete a single flight of stair. The main attraction of the Shey Palace/Monastery is the 39 ft tall Shakyamuni Buddha statue made out of copper. The monastery also features wall paintings from 18th(?) century. The paintings are in precarious condition and hence photography in the inner sanctum is strictly prohibited.


Besides this single room which houses the giant statue and the wall paintings, there isn't much to explore inside the monastery. Only other thing you can possibly look at is the 360-degree panoramic view of the valley. The monastery overlooks this lush green meadow which is almost a protected sanctury. The meadow also has the 'Holy Pond' which is home to some of the biggest salmon fishes you'll ever see. Since fishing (or any sort of hunting) is strictly prohibited, the pond and the surrounding areas have flourishing flora and fauna. In fact, the 10 ft tall fencing around the pond is only as far as one can go, if you're an outsider. Only a select few locals are allowed to step inside this protected habitat as caretakers. However, you are allowed to feed the fishes and ducks from outside the fence.


It was late noon by the time I got done with Shey Monestary. Right opposite the entrance to the monestary is the Holy Fish Pond, which runs parallel to the road connecting Shey to Leh. The road is lined with tall trees providing shade to the tourist cars. I parked my bike under the shade and lay my 6 ft frame on the bike, taking a breather from tourist-spot hopping. I spent nearly and hour doing nothing except for looking at the fishes and ducks and hearing the melodious chirping of the birds. The cool breeze blowing from the pond only added to the sweetness of the moment. I spent almost an hour doing nothing. That's correct, I did absolutely nothing and I was truly content with it. Because in that one hour of nothing, I was with nature. Just listening to the birds, looking at the fishes fighting for bread crumbs, noticing the shape of the leaves as they swayed with the breeze and gauging the pitch of a duck's quack - simple things. William Henry Davies would've been proud of me.


The rhythm of tranquility was broken by the sound of the screeching tyres. A jeep full of 4-5 young boys stopped next to me. The 'party people' asked me if I knew the way to the Rancho School. I had no clue what they meant. They tried once again and asked me differently, "Do you know where's the 3 Idiots school?"
"No," I replied.

They speed away. Just then it hit me that the school featured in the movie '3 Idiots' is right around the corner - had read about it on forums before coming starting my Ladakh trip. I enquired with the next door general store and learnt that Druk White Lotus School aka Rancho's School aka 3 Idiots school was barely 1.5 km away. The time was 5.30 pm and by 6, the school's gates shut for visitors. I raced to the famous school and reached just in time for the last session of the day. The sessions explains the qualities which make this school such a special attraction. The school has employed a number of indigenous methods such as solar panels, positions of classrooms and hostels to keep the indoors warm during winter and cold during summers, rainwater harvesting, natural filteration systems, etc. After the 20 minute session, the school personeel takes you on a trip around the school showcasing more features about the school including the famous window underneath with Chatur was electrocuted in 3 Idiots.

India can be quite amusing if you're not from here

I returned back to the hotel from Druk Lotus School. At the hotel, I caught up with two of my Israeli friends. We decided head out for drinks. After a couple of beers, we decided to order food. For one of the two, this was his fourth visit to India while the other guy was visiting India for the first time. The newbie wanted to try some Indian food and since I was with them, he decided to rely on my recommendation. The more experienced fellow wanted to eat his favourite comfort food - Pizza.

The Pizza guy ate his food and wiped off his hands with a tissue paper. As we got done with our India food (roti & sabzi), I asked for a finger bowl. Both were truly amused. They had no clue what it was. Once I explained them the concept of finger bowl (curry sticks to the fingers and hence you need hot water and lime to cut the stickiness and wipe it off), they too wanted to try it. To the extent, even the guy who ate Pizza and didn't really need it (though he had been to India thrice before, he had never experienced this) asked for a finger bowl just to try it out.

It's amazing how the simplest of things - the things which we take for a routine - can be totally fascinating for an outsider; may it be a simple finger bowl or homegrown beer.