Tuesday, 20 August 2013
I woke up in the morning with a pleasant surprise, the rain clouds gave way to bright sunny sky. I kept all of my clothes outside in the balcony to dry out. 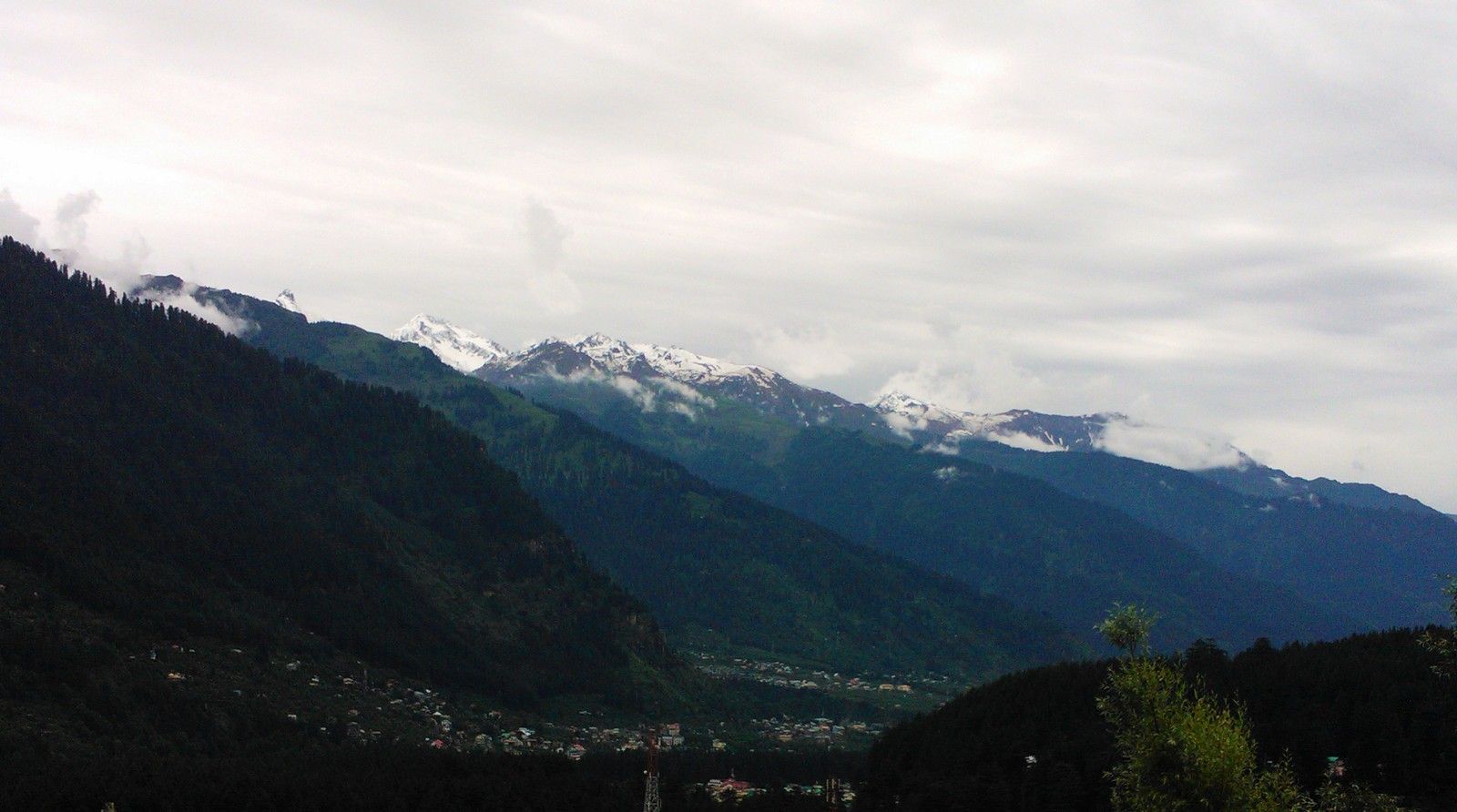 Since check out timing at most hotels in this part is at 12 noon, I knew that if at all a room was going to get vacant it would be after 12, yet, I didn't wanted to wait for too long and miss out on the room to someone else. Hence, around 11.30, I packed my bags and headed to Himalayan Country House which was barely 200 mt. from that piece of crap where I spent the night. When I reached there, much to my relief, Mr. Raju informed that he does have a room for me but since the guests checked out minutes before I reached, they were getting the room cleaned & ready for me. I had to wait more than an hour for it, but I wasn't complaining. The housekeepers had to clean & prepare not just my room but 7-8 more rooms for a French group. Since I didn't had a single grain of food in the morning at hell hole, I decided to have the breakfast at HCH's restaurant. The cook was nice and was more than happy to alter the recipe of their Spanish Omlette and add a few more ingredients as instructed by me, to suit my taste.

While waiting for the room, I learnt that the French group has 14 tourists and they were also there to ride to Leh. Apparently, HCH also runs a tour company where they organize treks and bike trips. After the checking in, I decided to get a bike wash since earlier day's Mandi to Manali ride had turned my bike's colour from black to mud.

While riding that 200 mt. stretch from that crappy hotel to HCH, I noticed that front disc brake was making weird noise.Their resident mechanic who was readying the REs before handing them over to the French group confirmed my doubt that the front disc brake is ruined and would need replacement for which I'll need to go all the way out of town towards highway where there are a bunch of bike shops. Couple of people in the area suggested that I should go to Rahul of Rahul Bike Service, as he is pretty good for all non-REs. He seemed like a genuine guy. When he removed the old brake pads, that's when I realized the extent of wear & tear the earlier day's ride had put on my brakes. I was as if the rubber on the pads never existed only.


Cost of changing the front brake pads was 160. He told me that generally he charges 200 (including labour charges) but because I came across as a decent person, he was charging less. I knew he was bullshitting yet I gave him 200 bucks and asked him to keep the change. The first thing that I were going to encounter after Manali was the notrious Rohtang Pass and I wanted a genuine mechanic to be just a phone call away if anything went wrong. I paid those extra 40 bucks to buy his loyalty. I took down his phone number and told him that the next day I was going to leave for Rohtang and if anything went wrong, I'd call him up and he should provide me technical support. He agreed. Why wouldn't he?

I was carrying a pair of Cramster city-riding gloves which are good only in city/warm conditions, since they have pores in them for ventilation. My hand would freeze if I wear them at Rohtang. While my bike was getting her spa treatment done, I met few bikers who were returning from Leh. I asked them about shoes and gloves. They told me about a particular type of cheap Chinese gloves called -20°C, which won't work at -20° but are good enough to get one through the snowcapped passes. Also gave me directions to the shop where I'd get gumboots. I had heard about cheap gum boots from many other people. I headed to the market and bought myself all of those stuff. 200 bucks for the gloves and 300 for gum boots. Sorted!

It was 7ish and since that the Spanish Omlette was the only thing I had, I was starving by now. I came across this small restaurant tucked inside one of the bylanes, in the market. As I wanted to taste authentic cuisine, I ordered Thenthuk. The soft-spoken, teenage Nepali boy who was my waiter told me that Tibetians (and Nepalis too) eat Thenthuk during winters; it keeps the body warm. It was filling but it was pretty bland. Most people who're not used to eating bland or Tibetian food, won't like it. I had to add a lot vinegar, chilli water and soya sauce to get a decent taste.

You'll get same type of bakery stuff throughout the Manali. There's a German Bakery in every lane, with the same kind of cakes and stuff. It seems, as if the entire Manali buys their bakery products from the same German fellow. While, my Thenthuk was being cooked, I experimented with a couple of more bakery delicacies. 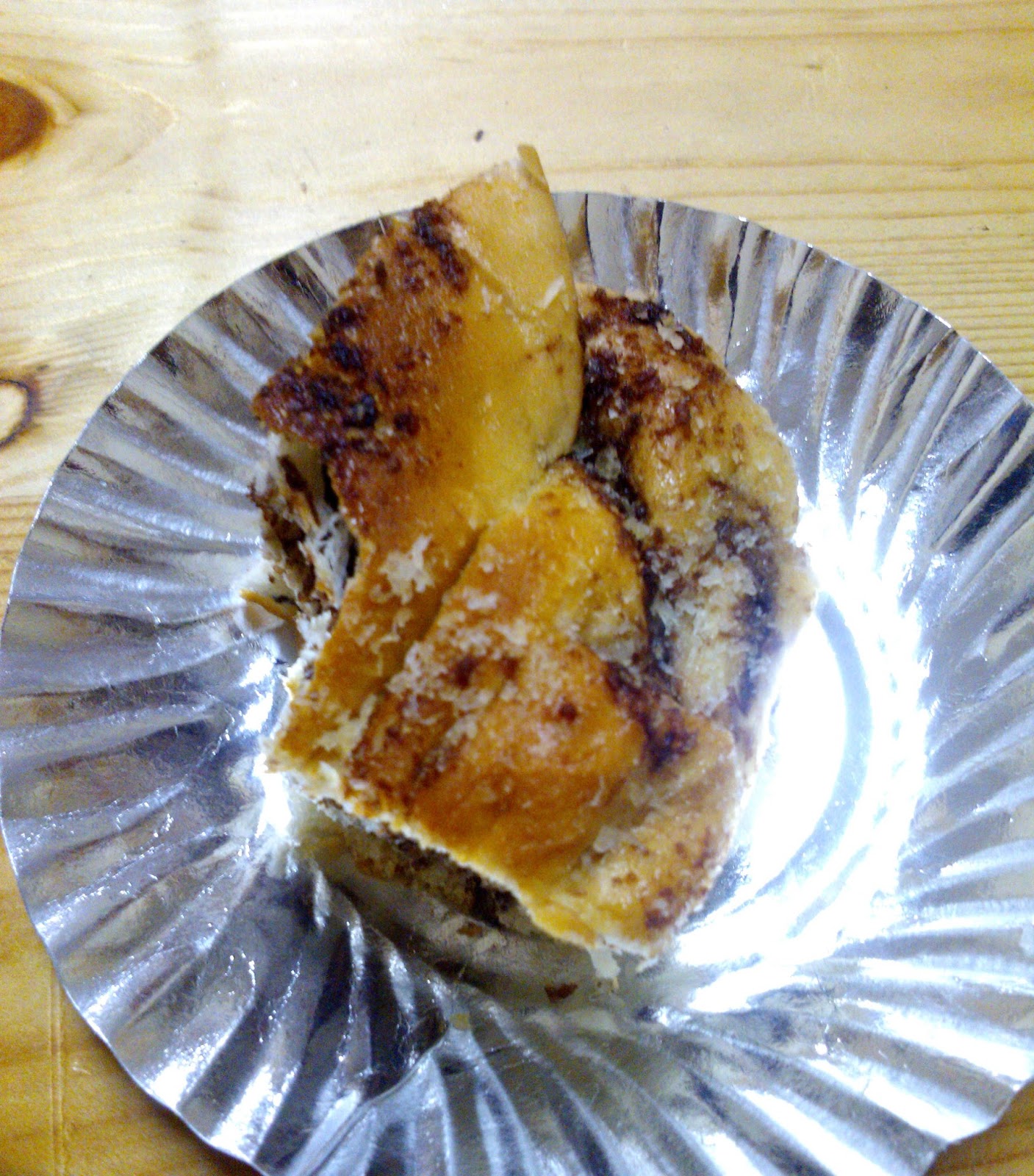 I tried this croissant thingy, I believe it was called Russian something, don't remember the name. It was sweet and chocolate layered between the bread alongwith coconut garnishing. 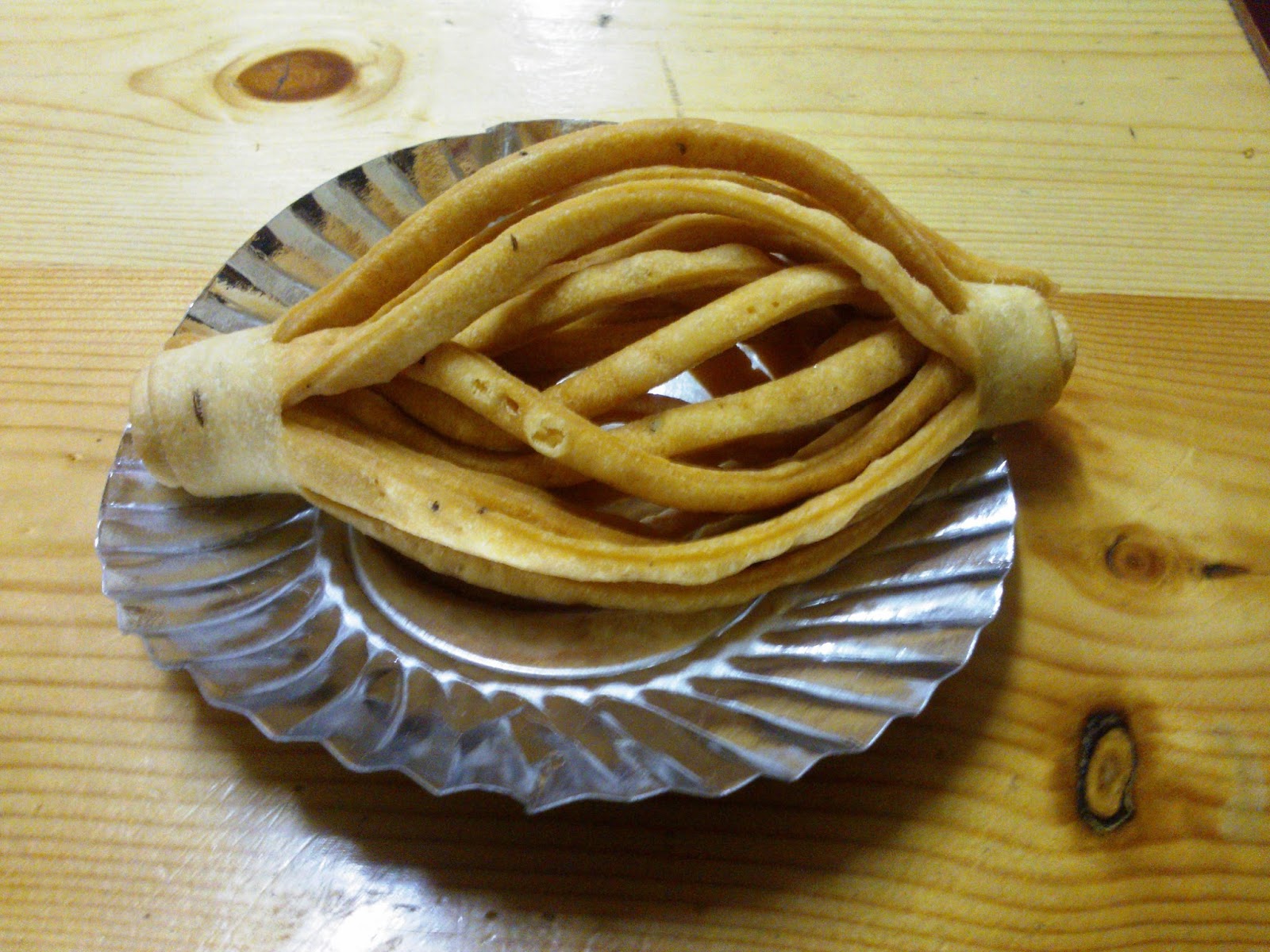 After that, I tried this salty thingy. Again, I don't remember the name but it looked like toy as you can see above. It tastes very similar to breadsticks. In my opinion, it would make an interesting 'biting' with drinks.

While randomly going through the by-lanes, I stumbled upon this shop which was nothing short of a gold mine for biking and treeking gear. Fittingly, it's called Trek Shop. I bought a bag cover for my backpack. Over and above, I bought something that helped a great deal throughout the trip - jute covers for my shoulder bag and saddle bags. And while branded companies charge a bomb for mediocre quality saddlebag covers, these jute covers are not only inexpensive but they also do a great job of keeping the stuff dry 95% of time. We got chatting and he realized that I'm a serious biker and not one of the other amusing window shoppers who come to his shop only to ask the price of the gadgets. He hates it when people ask for discounts. He believes that when he's already selling great quality, self designed stuff at prices that's 1/4th of the branded, flimsy stuff; how can people expect him to charge any less? And, well, he's right, I think. I told him about the biking jacket that I was wearing at that moment, as well as about all other riding gear I had. Also informed him about the type of highend biking stuff being sold at astronomical prices to Harley & Ducati riders in Mumbai, and discussed marketing opportunities for his stuff in cities like Mumbai & Delhi. Here's a man who won't even give even Rs. 5 discount to anyone but when I asked him the price of this magnetic compass, he gave it to me saying, "It's complimentary for you, take it!"
And people think, I'm introvert. Ya, right!

I had thekthuk at a weird time, 7ish. Hence, I wasn't too hungry for dinner but I saw this cool looking place called Drifters' Inn & Cafe on my way to the hotel and got tempted to visit it even if for just half an hour. After dropping of all the stuff I shopped, back at my room I went to the Drifters' Inn which was a short 7-8 minute walk from the hotel.

Great range of beer, good food, cool ambience and great music - you can easily mistake this place to be somewhere in Bandra. Added bonus - Wifi! Since I was all alone, I was sitting at one of those high chairs, ordered a beer and was enjoying the music while waiting for my food order to arrive. Two girls and a guy were sitting at the opposite table. We soon got chatting and I found out that they were from Mumbai too. They invited me to join them on their table; and I ended up spending rest of the evening with them along with good food and drinks. Unfortunately, I forgot their names and forgot to save their number too. All I remember is that two of them were a couple and the girl who was single was a Horticulturist. (If you're reading this, just want to let you know that it was a fun evening with you guys. Feel free to ping me!)

Till now I had only heard the stories but that was the first time I realized what being a single traveler means!

All in all, it was a great Sunday. Got all of my work done with respect to the protective gear, got my bike in tip-top condition and prepared myself with all the essentials to start the real climb up the high passes.

Travel Tip: If you're a biker, trekker and/or an adventure frek; and if Manali features on your itinerary, even if you've not got all your gear, worry not, Manali has some great shops for adventure stuff. However, sometimes, they might've ran out of stock and it may take  a week or so for a particular item to arrive. Hard luck, in that case. But unless you're stuck up on a particular brand, you'll most likely find a substitute.