Friday, 16 August 2013
When I finally woke up, I realized that I was feeling cold despite being wrapped up in a thick blanket. The night before, I did set an shut down timer on the A/C but then later on, while I was exploring the A/C remote, I put undo the timer and put it on some stupid program mode because of which it stayed on the whole night. Turned off the A/C and within minutes I was normal.
(The above information was not really important, but since I'm writing the travelogue, I thought I might as well write it.)

I opened the curtains and realized it was raining cats & dogs. And dinosaurs & crocodiles. While waiting for the rain to subside, post-breakfast, I decided to stroll around in the heritage property and get some clicks. The restaurant had guns and knives on every wall, and the passage was adorned with these old portraits and other royal items. But my favorite one was the bar, with low ceiling, semi-circular beams and antique lamps; it looked spectacular. 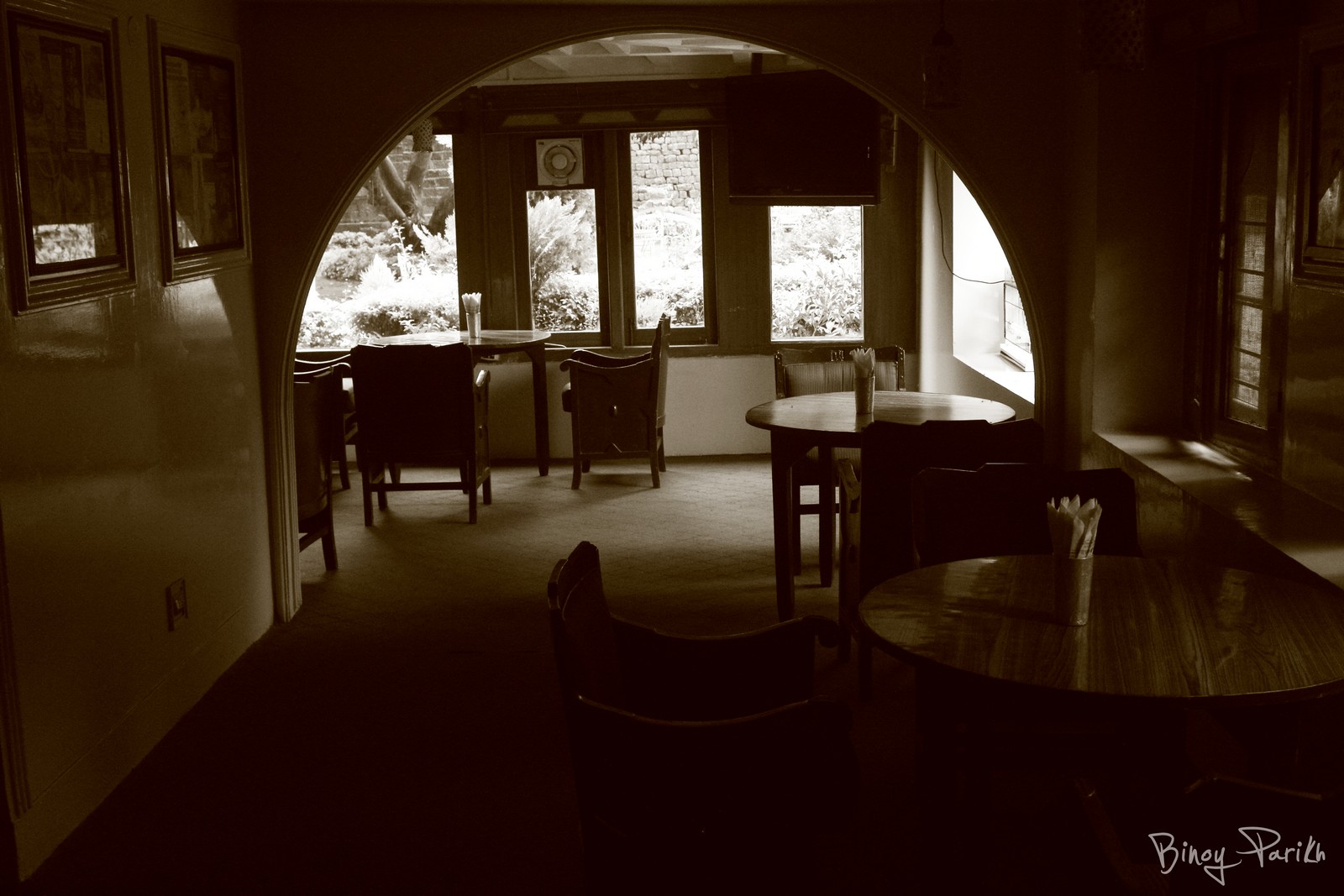 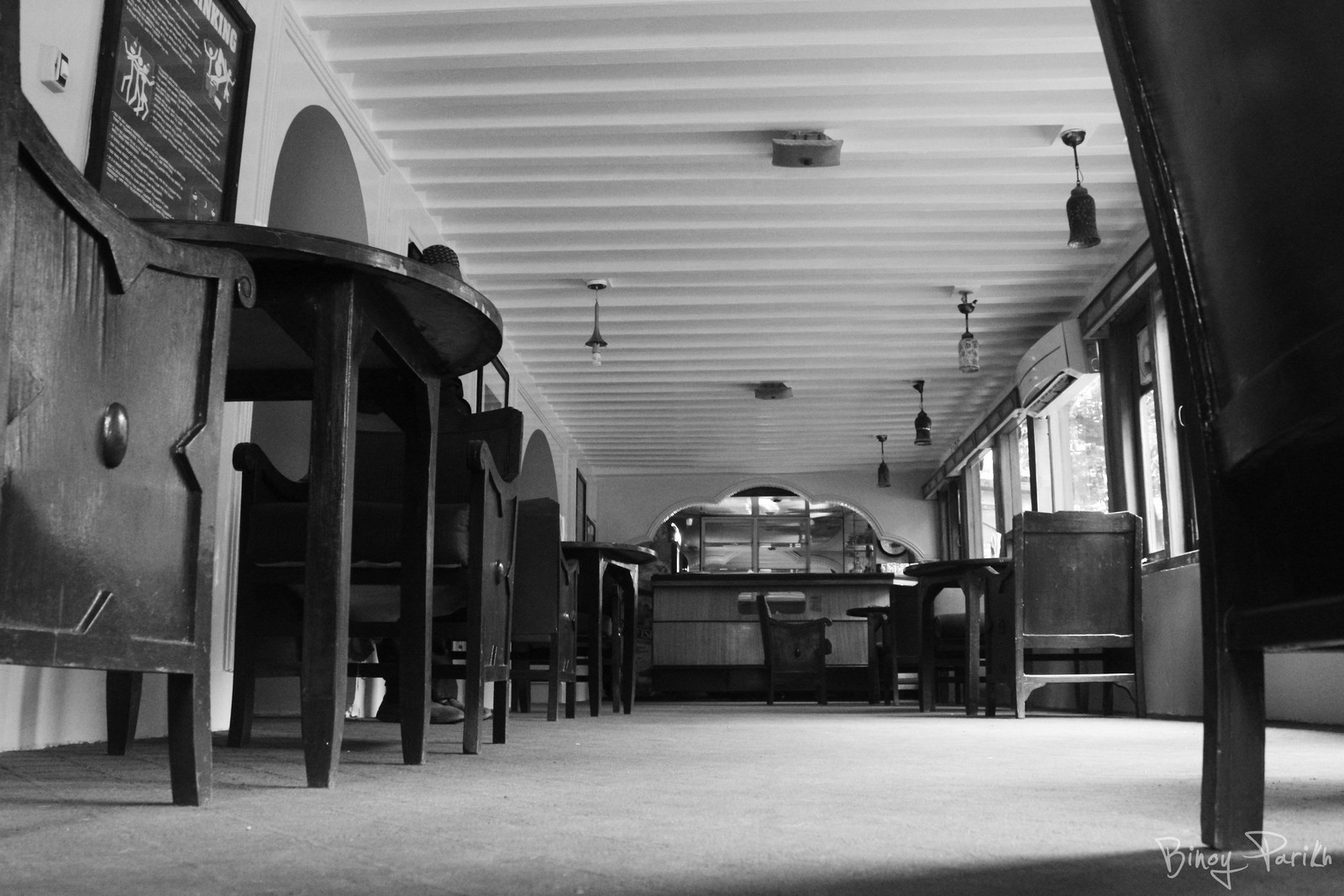 "There were voices down the corridor,
I thought I heard them say..." ~ Hotel California 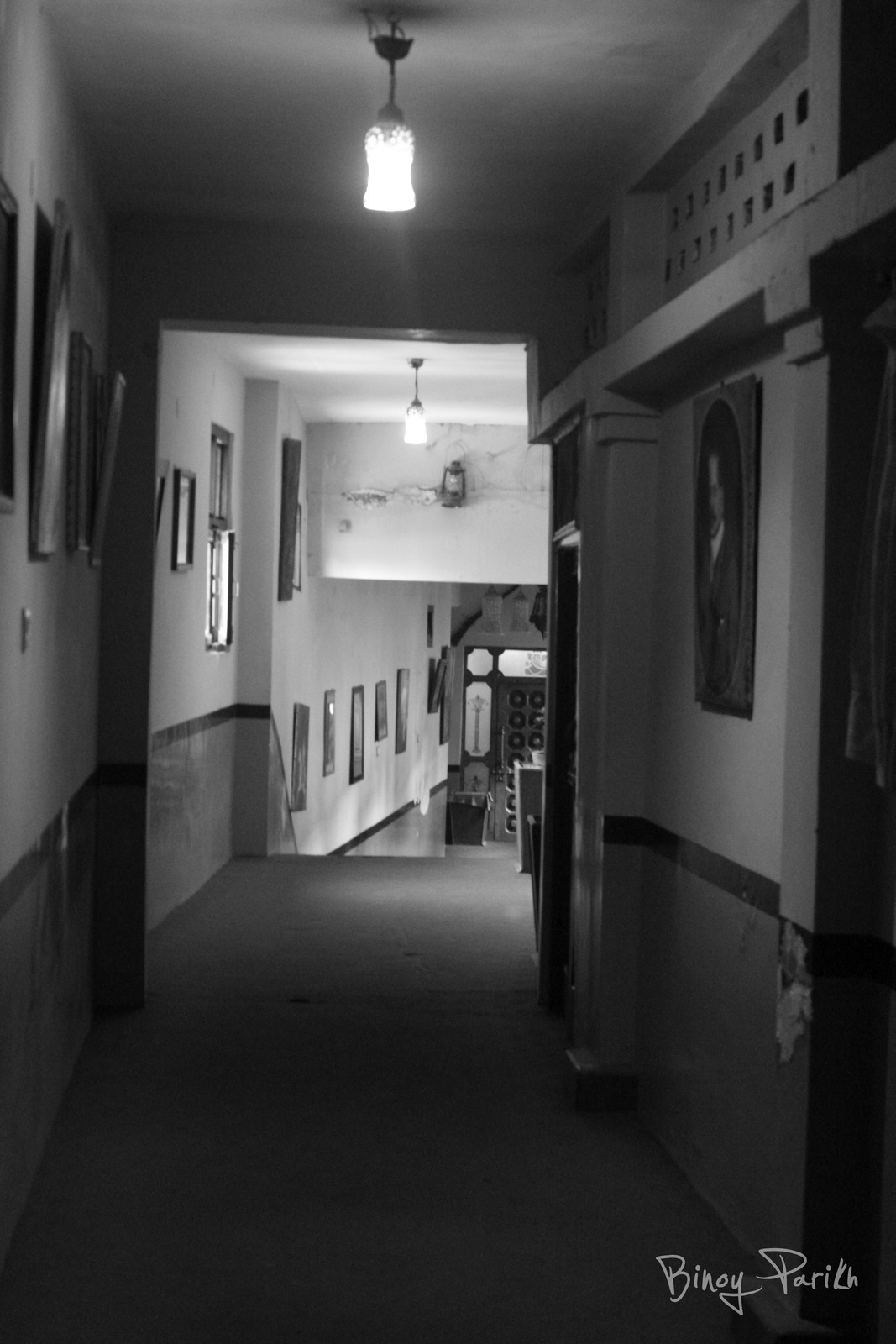 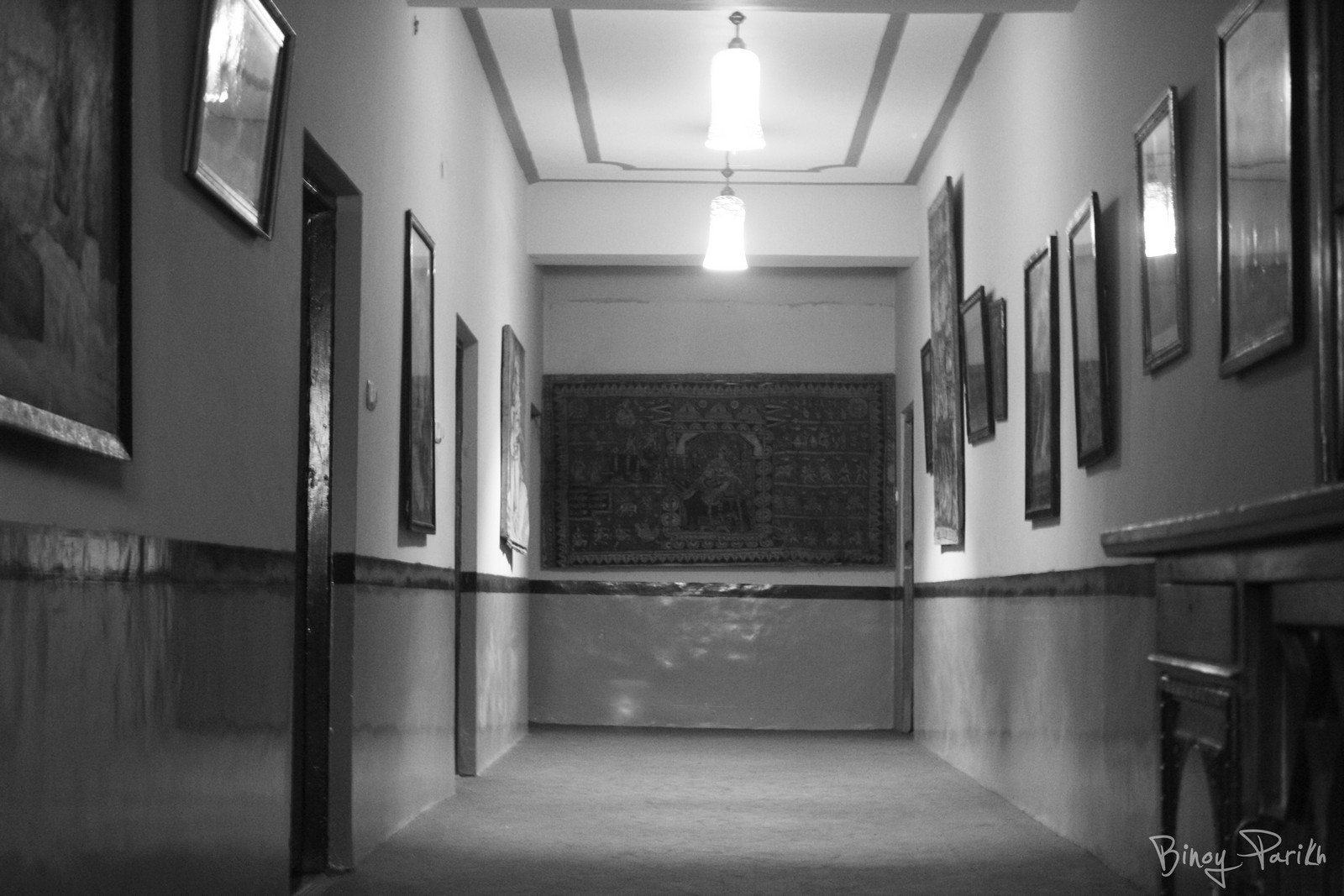 These gorgeous lamp shades adorned the bar ceiling. Each one is an unique piece.

Guns, above the restaurant door. 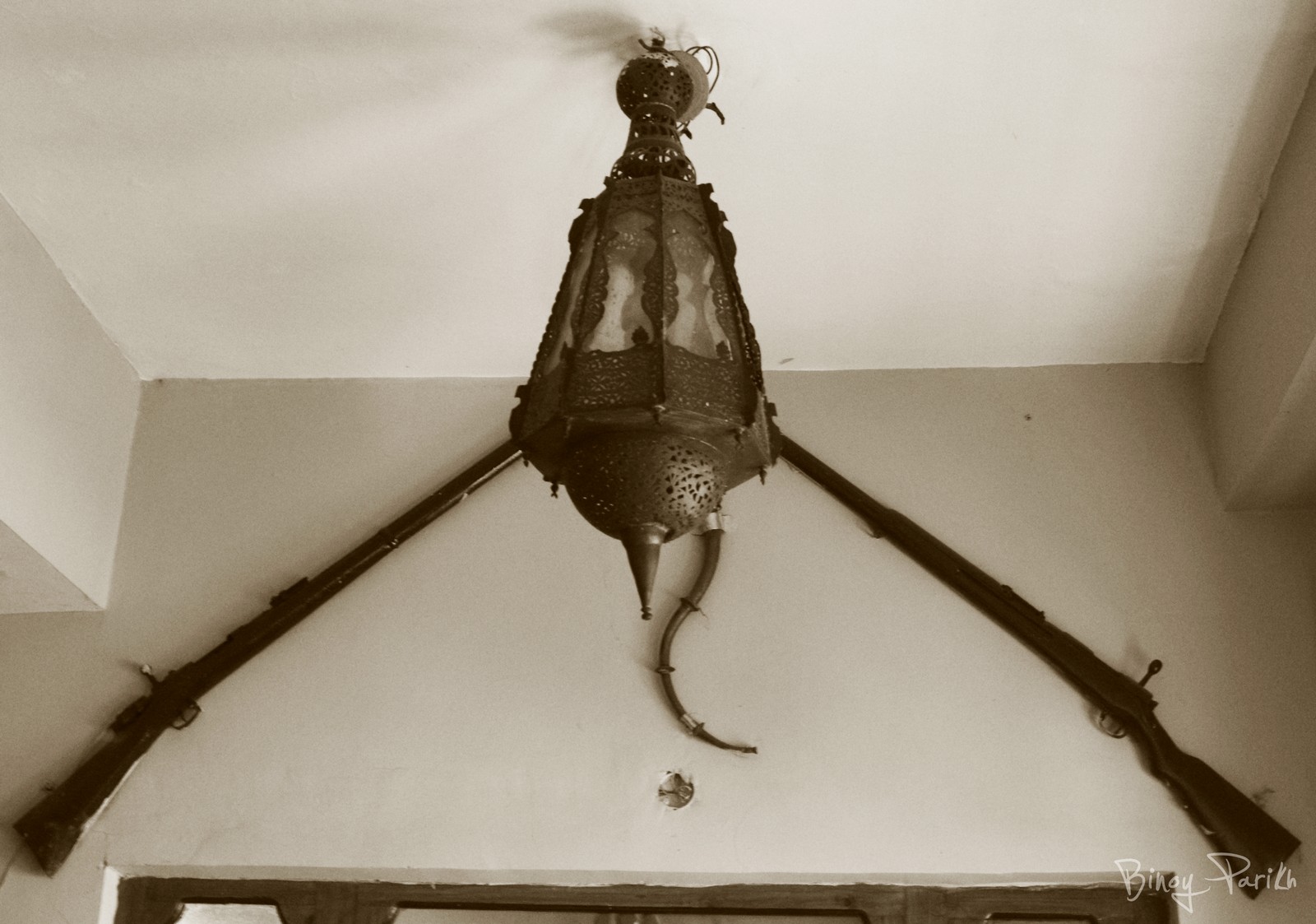 If there's a Zombie Apocalypse, this is place I'd want to hide out. Look at the amount of firepower this place has, man! 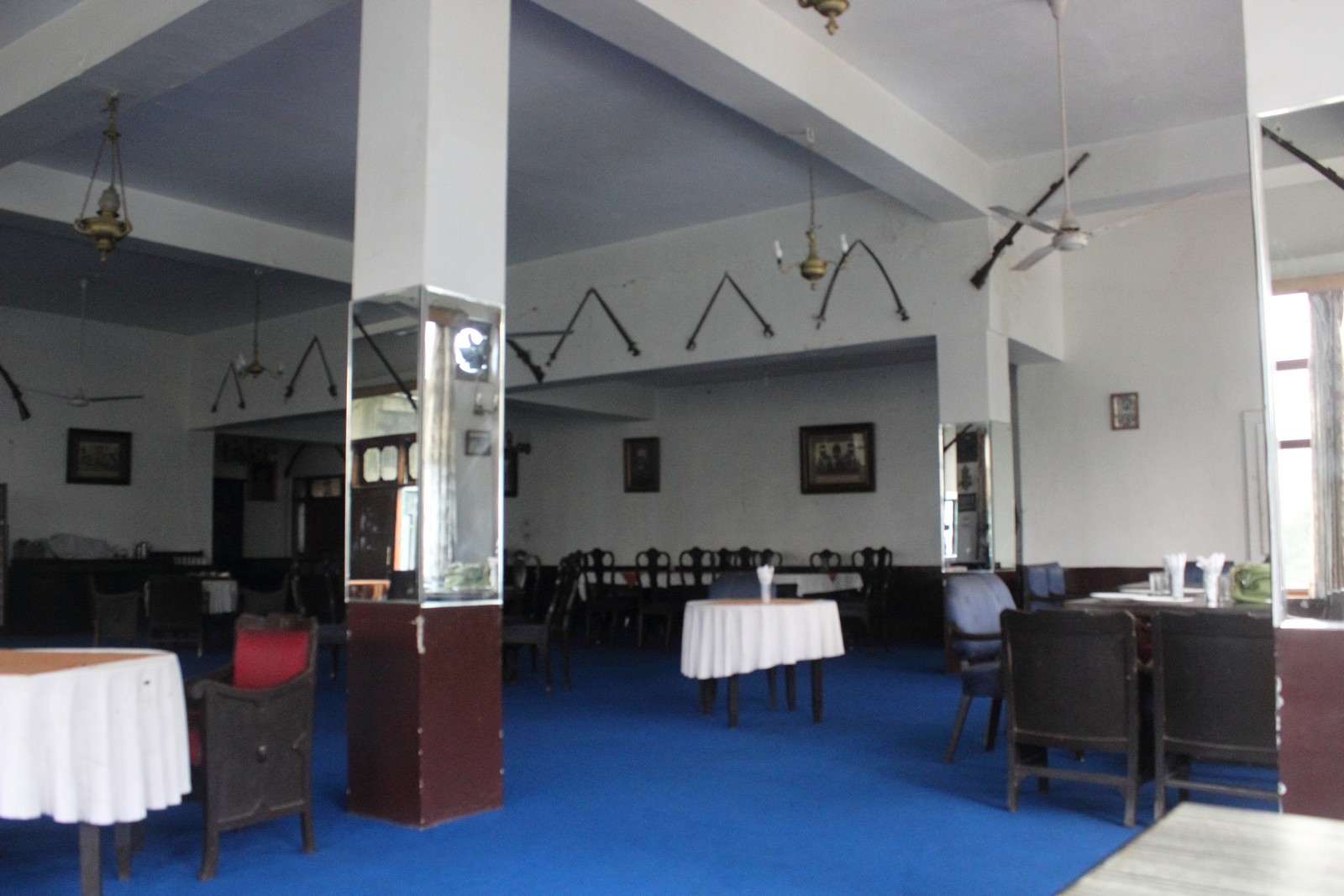 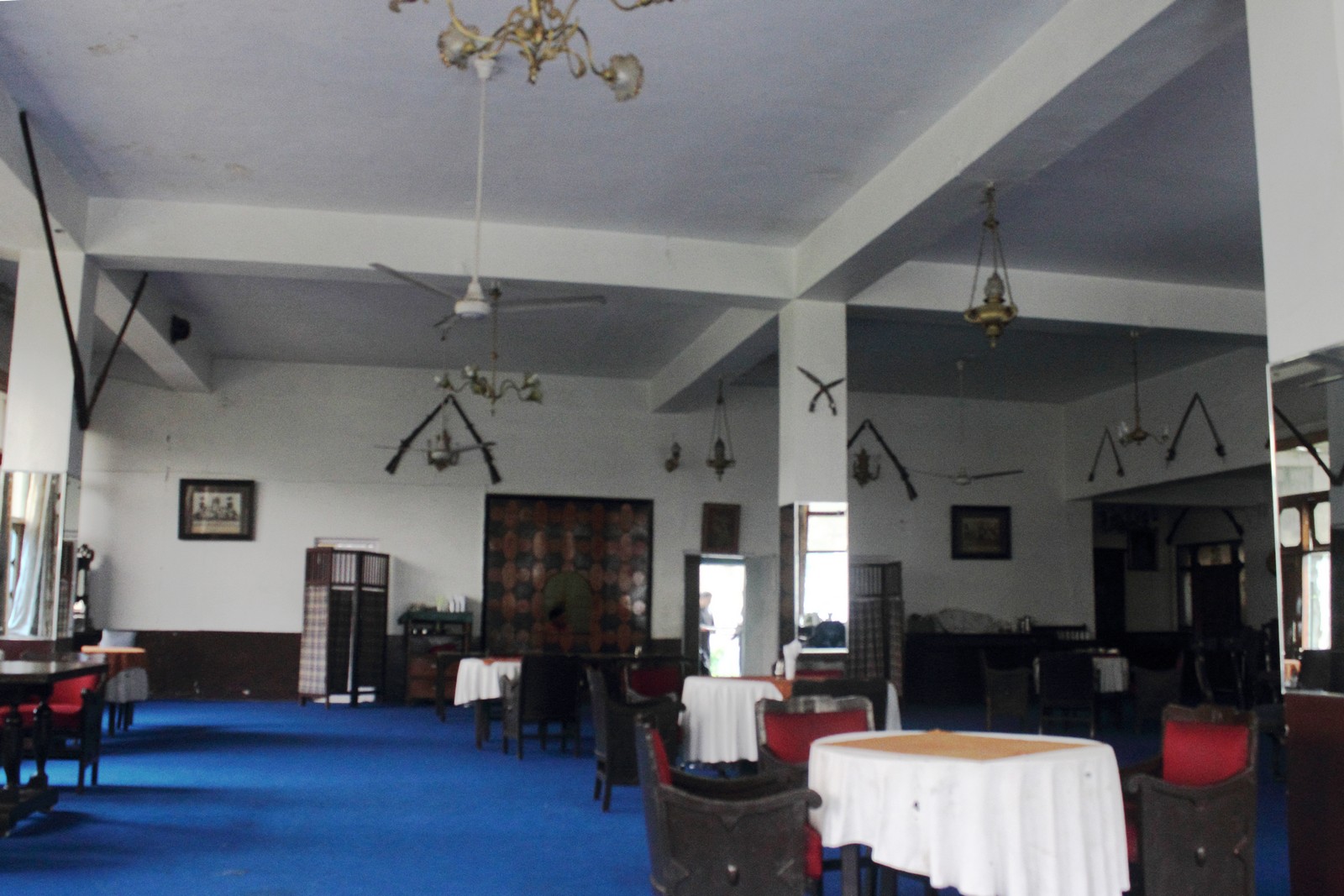 The garden right outside the bar has beautiful wrought iron seating, which is used for open-air, candle-light dinner. Unfortunately, couldn't dine there the night before since I was too tired.

There's nothing much to see in the town but if you're going to have a stopover at Mandi, before reaching Manali, and if the budget permits, I recommend staying at Raj Mahal Palace Hotel or at least have your dinner there. I didn't order much food so can't comment on that but looking at the standard of the hotel, I'm sure it'll be good too.

Finally, realizing that the rain was not going to stop anytime soon, I decided to make a move, nonetheless. Heavens had opened up by the time I tied the luggage and started the ride. About 10-15 km. down the highway I encountered a couple of bikers. I stopped by to ask if there was a problem or needed help. Turned out they were just sightseeing. After introductions we decided ride together all the way to Manali. We stopped along the way at many places to check out the breathtaking views and to get the clicks. 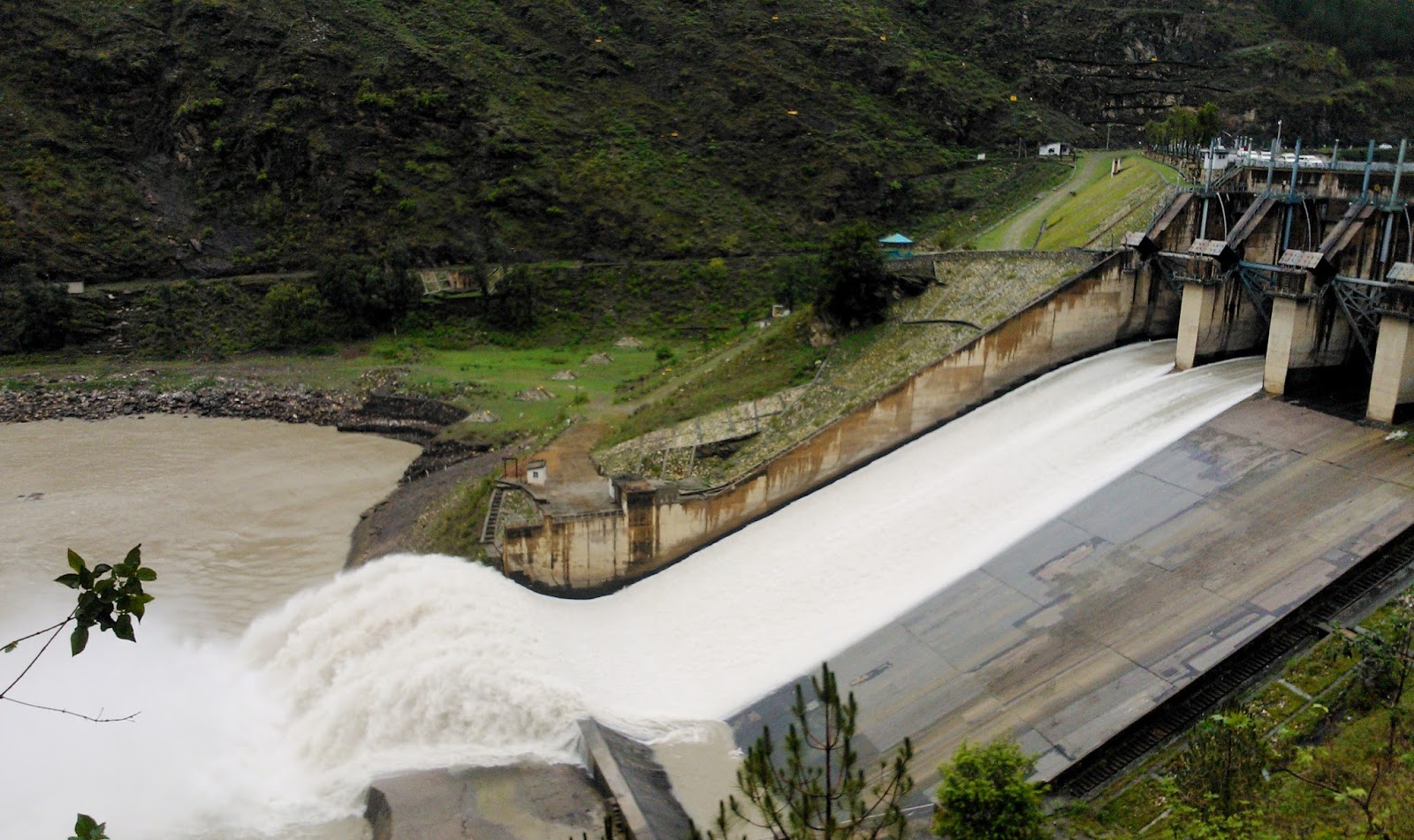 These Bangalore brothers told me that they had booked a tent outside of Manali and that they don't mind accommodating one more person with them in the tent. But, they weren't as nice as they came across, at first. About 20 kilometers outside of Kullu, one of the brothers decided to start racing and started zooming away. Though he had a more powerful bike, I was able to keep up with him while the second brother lagged behind. The roads were slippery, it was still pouring and yet this guy wanted to ride like a maniac; probably to get rid of me or something. Since I had to stop for a refuel, I let him ride away, thinking I'll call him upon reaching Manali as he had already shared his number with me. But as expected, he didn't receive the call.

After refueling at Kullu, I carried further on those wet and broken roads towards Manali. The entire 115 km. journey from Mandi to Manali was rain-soaked. There was not even a single 5 minute interval for which it didn't rain. Also, throughout the journey, I was riding next to either a dam, a river or a gorge. And not to mention, the views were spectacular. Despite all the broken roads, rain and the fact that I was shivering by the time I reached Manali; I truly enjoyed the ride.

A friend of mine who started for Leh with his biking buddies just a week before my trip gave me a contact of one a hotel owner, one Mr. Raju and strongly recommended that I stay there. I looked up the name of the hotel - Himalayan Country House, on the internet and found lot of positive reviews about the place. I called up the person once I reached Manali. Unfortunately, his hotel was packed. I tried searching for a room for about 2 hours all over Manali but couldn't find a decent one. Most places were either packed or too expensive. Mr. Raju had told me that if I couldn't find a room, I should give him a call and he'll arrange something. Hence, I did so. He gave me a contact of another recently-opened hotel. Room looked decent, but the view was great and the balcony was a bonus. Since I was shivering and tired, I decided to check in.


And then started my misery.

There was no hot water in the bathroom, an eternity and a tip of 50 bucks later, the sole waiter brought me a bucket of hot water. The bathroom already had soap and towels. After the hot bath, I grabbed the towel and realized it's cold & dripping wet. I hadn't even unpacked my bags where I had my personal "DRY" towel. And there I was shivering and cold. I somehow ran and grabbed the napkin from my backpack, dried myself, got into dry clothes and jumped inside the blanket.

I was starving since I didn't had a single grain of food since the morning breakfast. Ordered hot coffee to get my batteries recharged. The coffee was good, exacting to my taste - hot & strong. In fact, that coffee and the view were the only two good things about that place.


The hotel's kitchen where the housekeeper stayed had entrance for opposite direction for which one is required to either shout at the top of the lungs or walk out in the rain and call him personally. After shouting for more than half an hour, his highness appeared. At this hotel, a menu system was unheard of. The guests are required to eat whatever they cook, since the expect guests to eat from outside. After more than an hour, I got the food served in my room - couple of pathetic tasting vegetables, okayish dal, few roti & rice equivalent to a family of 6. I had no choice but to kill my hunger with huge amounts of dal-rice. They charged me 200 bucks for something that you'd get for 30 bucks at a lowly joint outside Dadar station; and yet you won't eat it.

As if this wasn't enough, the hotel owner, who at the time of showing me the room and negotiating the price was all sweet and nice, decided to put me under more agony. Since I was feeling cold, I asked for extra blanket, the housekeeper told me that they don't have any extra ones left. Pissed, I decided to take this up to the owner, thinking, since he was nice to me earlier, he'd be helpful. On the contrary he started yelling as if he was a evil hostel warden.

I called Mr. Raju and informed him about the incident. Since he had referred me the place, he was feeling guilty about the situation. He knew me only via my friend's reference and a couple of phone calls, never even met; it wasn't like I was a regular guest at his hotel or something, he could've easily told me that he doesn't want to get in this but he somehow felt responsible. He told me that that was the exact reason why he generally doesn't like referring other places because then when such things happen, his reputation & name gets spoilt. He told me that I should check out and come to his hotel in the morning and that he would arrange a room for me at any cost.

If you're traveling to Manali, do not, I mean, DO NOT stay at this place called New Friends Hotel (or something like that, don't remember the exact name) near Manu Temple, unless you wish to have the worst ever accommodation experience of your life.

Thankfully, I regained my body heat post dinner and one blanket sufficed. With knowledge that the next morning I'll be checking out and hopefully go to a better place, I went to sleep after exhibiting my wet clothes all over the room.